Mittagong is the gateway to the magnificent Southern Highlands.

Below are just some of the many attractions this delightful region has to offer. Why not make your base at the Grand Country Lodge, stay a few nights and visit these unique attractions.

The Treetop Walk takes in native rainforest, the steel walkway which features two gently swaying cantilevered arms, and a central tower raised nearly 50 metres from the forest floor. Positioned 710 metres above sea level, the stunning panoramic views take in everything from the rainforest canopy, coastal towns and out to the Pacific Ocean.
More ... >

Mittagong is known for its idyllic walks. Surrounded by the lush hillsides and waterfalls of the Southern Highlands, the area also blooms with native Waratah in the warmer months. Mittagong lies between the volcanic peaks of Mount Gibraltar and Mount Alexandra. Mount Gibraltar, at 863 meters, is the highest point between the Illawarra Coast and the Great Dividing Range. It offers a range of short walks, with duration times of between 10 and 25 minutes. Numerous lookouts are accessible from Mount Gibraltar.
More ... >

Wombeyan Caves is a network of over 230 caverns and has a well-deserved reputation as one of the country¹s most attractive cave systems. The name is of Aboriginal origin meaning 'grassy flats between two mountains'. The caves were discovered in 1828 by a party led by John Oxley and John Macarthur. Oxley was responsible for much of the early exploration of the Southern Highlands. Macarthur, known to many as the founding father of the Australian wool industry, had accompanied Oxley in the hope that he would find suitable new grazing lands.
More ... >

The Southern Highlands has more than 60 wineries operating in the area. Cool-climate wines are the name of the game here, with premium reds a particular specialty. Centennial Vineyards in Bowral and Mount Ashby Estate near Moss Vale are two not to be missed
More ... >

All Aboard Braemar Model Railways

Visit the displays at All Aboard Braemar Model Railways and take refreshments at the cafe. Better still, spend some time looking at the model railways and have a picnic lunch at the tables on the lawn.
More ... >

Fitzroy Falls offers a spectacular national park experience. In addition to magnificent waterfalls, it is a great place to experience a lyrebird singing along one of the walking tracks, vistas into the rainforest gullies of Morton National Park from one or more of the many lookouts, a bush picnic by the creek or a refreshing cuppa in the Falls Cafe.
More ... >

Lake Alexandra in Mittagong Township is a man-made lake which started life as a dam supplying water for engines hauling coal to the Fitzroy iron mines almost 140 years ago. A park land reserve surrounds the lake and birdlife lives in profusion on the water and shores. Barbecue facilities and shelter sheds are available. The whole area has recently been revamped and renovated. Lake Alexandra has a fantastic picnic and children's play area.
More ... >

Brochures on local attractions & restaurant menus are on display near Reception. For more information, visit the Southern Highlands Tourist Information Centre which is located right next door to the Grand Country Lodge. There are plenty of souvenirs and displays. It is open 9am to 5pm weekdays and 9am to 4pm weekends. 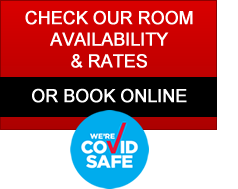